What is the Vitreous?

The vitreous is the clear gel-like substance that fills the interior of the eye (figure 1). The vitreous gel is in close contact with the surface of the retina and adheres to the retina. The retina is the layer of specialized nerve tissue lining the back of the eye that allows you to see.

What is a Posterior Vitreous Detachment?

As the vitreous ages naturally throughout life, its collagen protein structure slowly degenerates and becomes more fluid-like and less gel-like. The vitreous gel/fluid is encased in a loose sack-like material. This sack clings to the retina. A posterior vitreous detachment (PVD) occurs when this loosely sack like material separates from the retina (figure 2). Typically when this occurs one notices intermittent flashing lights, new floaters, cobwebs and perhaps a shower of black dots.

What causes a Posterior Vitreous Detachment and who is at risk?

A PVD is typically a normal age related change that occurs at some point in nearly every eye as it ages. It is much more common after cataract surgery. A PVD can occur suddenly after trauma even in young people. It also occurs at a younger age in those who are very near sighted (myopic). Less common conditions associated with a PVD include: diabetes, ocular inflammation, and vitreous bleeding.

What are the symptoms of a Posterior Vitreous Detachment?

PVD can cause new floaters, intermittent flashing lights, cobwebs and perhaps a shower of black dots (figure 2). The flashing lights are typically much more noticeable at night or in the dark and can sometimes become more intense with eye movement. Some people have prominent symptoms while others notice hardly anything at all.

Floaters are tiny clumps of cellular material or vitreous gel that float inside the vitreous cavity (figure 1). The floaters are seen as small specks, squiggles, clouds, or strands moving in your vision. They are often more noticeable when viewing a plain bright background such as a clear blue sky or a computer screen.

When the retina is tugged on, it can send disorganized visual signals to your brain that are interpreted as seeing light. As the vitreous separates from the retina during a PVD, the retina gets pulled on and flashes of light, sparkles or ‘stars’ can be seen. These are often more noticeable in dimly lit conditions, the opposite of floaters.

Does a Posterior Vitreous Detachment cause any lasting problems?

In the majority of PVD’s nothing unusual or concerning is found. The major risk of a PVD is the development of an associated retinal tear. Retinal tears accompany posterior vitreous detachments about 10-15% of the time. It is the presence of these tears that may increase dramatically the chance of developing a retinal detachment. A retinal detachment is a very serious sight threatening condition often requiring a major surgical procedure to repair. Once a PVD has been diagnosed a careful complete retinal exam is performed promptly to screen for retinal tears. If treatment is required, an outpatient laser procedure can be performed in the office to seal the tear. If a retinal tear is present but not discovered and treated in a timely way, the risk of progressive retinal detachment rises steadily. Therefore, prompt evaluation of the retina is needed if symptoms of PVD develop.

Is treatment required for a Posterior Vitreous Detachment?

Currently there is no medical treatment available for PVD. There is no evidence that eye exercises, diet changes or vitamins can help a PVD. A tiny minority of ophthalmologists offer laser treatment for floaters. However, this is not recognized by any medical society as a standard treatment. Since most of the symptoms of floaters decrease with time, there is concern that the possible risks of laser destruction of floaters outweigh the benefits. Similarly because of the risks, surgery is rarely indicated for a PVD except when the floaters obscure the vision and become disabling. In these cases, removal of the vitreous by surgery (vitrectomy) may be considered.

Will the flashing lights, floaters, and/or cobwebs go away?

At first, the floaters are often frustrating since they get in the way of seeing things clearly and can make activities, such as reading, difficult. The floaters and flashes are very bothersome to most people when they first appear, however in the vast majority of people they resolve or become less bothersome over a period of weeks to months as they settle below the line of sight. Treatment of associated retinal tears does not alter the presence of flashing lights, floaters or cobwebs. 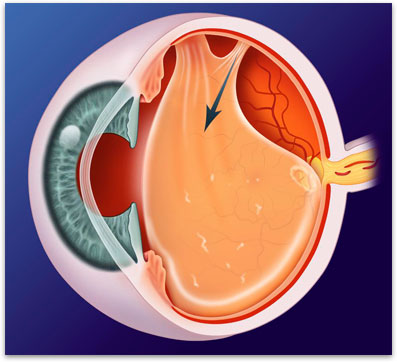 Figure 1. The vitreous fills up most of the eye. Floaters are depicted as white dots suspended in the vitreous cavity. Arrow showing a partial vitreous detachment. 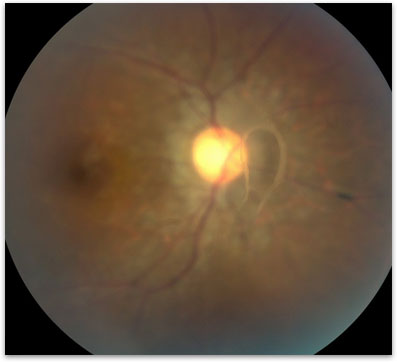