What is Central Serous Chorioretinopathy?

Central serous chorioretinopathy (CSR) is a relatively common condition that affects the macula (the part of the retina responsible for central vision). In this condition, for reasons not fully understood, a pool of clear fluid accumulates under the macula forming a blister. This blister separates the retina from its supporting layers and causes vision changes.

What are the symptoms of CSR?

Early symptoms of CSR include a dim and blurred spot in the central vision. Objects, especially straight lines, may appear distorted. Sometimes objects may appear smaller or further away with the affected eye. In dim light, a gray or brown spot in the central vision may be more obvious than in brightly lit conditions. Vision loss and changes can vary widely, however most people with this condition are still able to function reasonably well.

What causes CSR and who is at risk?

Individuals between the ages of 20 and 55 are typically affected by this condition. Men are 10 times more likely than women to develop this condition. The cause of CSR is unknown. The disease has been associated with stress and a few studies have found the disease is more common in people with “type-A personalities". Steroids of any kind (oral, nasal sprays, ointments, etc.) have been known to cause CSR to flare in some individuals and we advise you that if you have been diagnosed with CSR to avoid steroid use if possible.

How is CSR diagnosed?

CSR can often be readily diagnosed by a dilated eye exam and confirmed through the use of specialized testing. In the early active stages of the disease a small retinal detachment can be seen on examination (figure 1). Optical coherence tomography (OCT) is used to quantify how much fluid is under the retina in CSR (Figure 2). This technique is helpful not only in documenting the quantity and location of fluid collections but also in following the resolution of fluid during healing or after treatment. The fluid that accumulates under the retina typically leaks from a small point under the retina. A fluorescein angiogram can be used to diagnose the condition and identify the location of the leaking fluid (figure 3). A leaking point of fluid on a fluorescein angiogram is the hallmark feature of the disorder. In more chronic disease, signs of previous episodes of active CSR are often detected by the retina specialist and sometimes can be seen in both eyes. Not all of these previous episodes will have caused symptoms, however.

How is CSR treated?

Treatment is usually not necessary because most cases of CSR resolve without treatment after several weeks or months. There are certain patients where treatment is recommended. These include patients where the fluid does not resolve over the usual time frame, patients who lost vision in the other eye from CSR, and patients who need a more rapid recovery of their vision. The standard of care is to use a laser to “seal” the area of leakage identified by the fluorescein angiogram (figure 3). There are two different types of lasers that can be used to treat CSR, a thermal or “hot” laser and photodynamic therapy or “cold” laser. Thermal laser is used when the spot of leakage is not directly in the center of vision. Photodynamic therapy (PDT) is often preferred if the spot of leakage is directly in the center of vision, or very nearly so. PDT involves injecting a photosensitizing dye intravenously and activating the dye in the eye with a low energy “cold” laser to “seal” off the leaking spot.

What is the long-term impact of CSR on my vision?

In most cases, the fluid under the macula reabsorbs with little or no long-term damage. Over 90% of patients regain 20/30 vision or better. During the reabsorption process, the vision can fluctuate a great deal over hours and/or days. In some, the fluid will resolve but leave behind subtle visual defects such as distortion, decreased color vision, or altered night vision. CSR can become a recurrent problem and the repeated accumulation of fluid under the retina can lead to more significant vision loss. It is important to follow-up for evaluation and treatment if necessary, especially if the vision does not spontaneously improve. 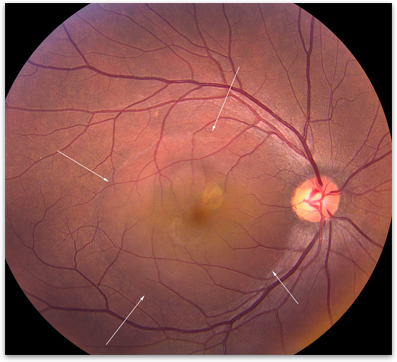 Figure 1. Photograph of fluid accumulation (arrows) in the macula in a patient with CSR. 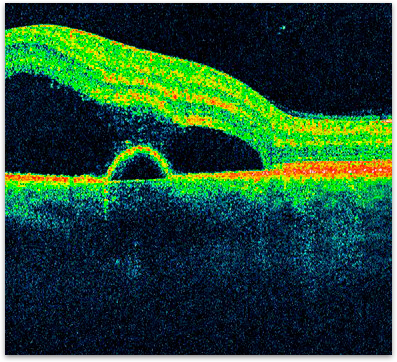 Figure 2. OCT showing an accumulation of fluid underneath the retina. 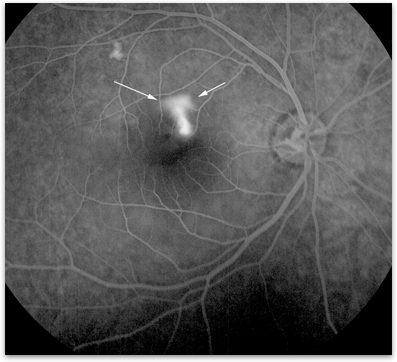