Histoplasmosis is a disease that is caused by spores of a fungus called histoplasma capsulatum. This particular fungus is found in places where there is an accumulation of bird and/or bat droppings. When the ground is dug up for planting crops, chicken coops are swept or holes are dug, the spores of the fungus are released and can be breathed in through the lungs. This causes mild flu or cold-like symptoms and the body normally fights off the infection within a few days without treatment.

What is Ocular Histoplasmosis Syndrome?

Ocular histoplasmosis syndrome (OHS) develops in a very small percentage of people that develop Histoplasmosis. In some people during the acute infection with histoplasmosis some of the fungus can travel from the lungs to the choroid (the vascular structure under the retina). Once in the choroid, the fungus causes scarring in the choroid and pigmented tissue of the eye. This scarring appears as small punched out yellow spots at the back of the eye (figure 1). As the scarring occurs, there usually are no symptoms at all. The scarring is usually only discovered incidentally years later during a routine eye exam.

How can Ocular Histoplasmosis affect my vision?

Most retinal scars from histop lasmosis do not cause any problems. Some scars that are close to the center of the eye (in the macula) can start to bleed and cause vision loss. The histoplasmosis scars in the macula can lead to new blood vessel growth (neovascularization) (figure 2). Neovascularization causes vision loss because the abnormal blood vessels that are formed do not have a tight outer layer which allows them to leak fluid and blood. If left untreated, the neovascularization can form a fibrovascular scar which will leave dead and/or damaged tissue in place of the normal, living tissue, causing permanent vision loss.

What are the symptoms of Ocular Histoplasmosis Syndrome?

There are usually no symptoms of OHS in early stages. Symptoms only occur if there is neovascularizaition or bleeding from a histoplasmosis scar near the center of the vision. If this occurs you may note blurriness or a small grey or black blind spot in the central vision. Objects, especially straight lines may appear distorted.

How is Ocular Histoplasmosis Syndrome diagnosed?

OHS is usually diagnosed by a dilated eye exam and confirmed through the use of specialized testing. Optical coherence tomography (OCT) is used to quantify how much swelling or damage there is to the retina. This technique is helpful in not only documenting the quantity and location of bleeding but can help to follow response to treatment. A fluorescein angiogram can be used to diagnose the condition and identify the location of the bleeding (figure 3).

How is Ocular Histoplasmosis Syndrome treated?

Ocular histoplasmosis usually requires no treatment. Antifungal medications are not useful. Histoplasmosis results in scars in the eye, there is no active fungal infection in the eye. In the rare case where abnormal blood vessels develop, laser or medication is used to stop the bleeding and preserve the vision. If the area of bleeding is small and located outside of the central vision the bleeding may be controlled using laser treatment. If the bleeding is close to the center of the vision medications are used. All the medications used were developed to treat a related condition (macular degeneration) but have also been found to work with ocular histoplasmosis (figure 4). The medications need to be given by an intraocular injection and may need to be repeated.

What is the long-term impact of Ocular Histoplasmosis Syndrome on my vision?

Usually the prognosis is excellent. If there are histoplasmosis scars in the macula it is important to have regular eye exams and an Amsler Grid to monitor the central vision. If bleeding occurs in the macula earlier treatment usually results in a better outcome. With intraocular injections of medication most patients have an improvement in the vision although permanent vision loss can occur. 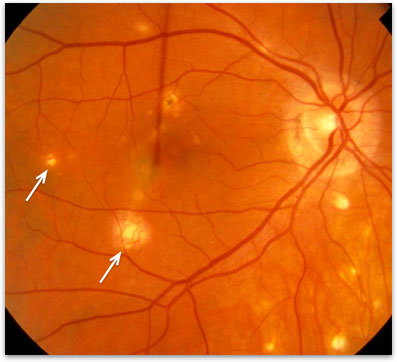 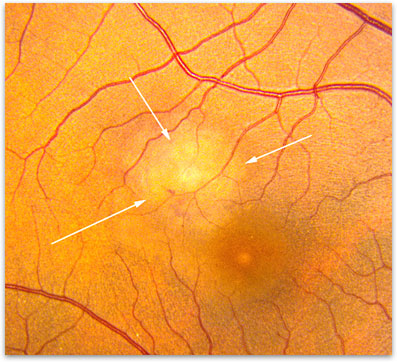 Figure 2. Bleeding (arrows) that occurs in OHS and can lead to a vision loss if not treated. 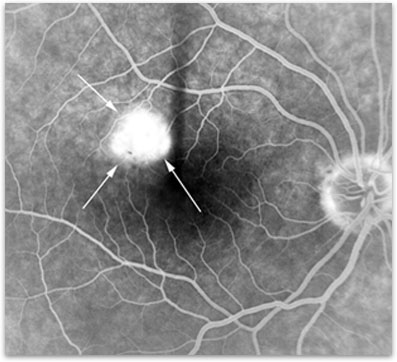 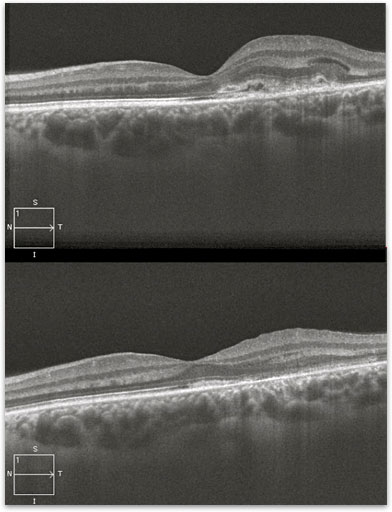